Boy, did we need those two points.

As Mitchell Pearce slotted the field goal that put the Roosters ahead with 5 minutes to go, it felt like deja vu all over again. A courageous effort, against quality opposition, but ultimately Warrior Nation was about to finish second once more. We were a club that had made huge progress in recent weeks, but one that still hadn’t figured out how to win the close ones. With just three wins from the first nine rounds, the playoffs looked a long way away. Spirit levels were as damp as our clothes as we struggled to comprehend how a roster this talented could be so far off the playoff pace by the representative round. Frustration boiled over into gasps and groans as another unstructured play broke down.

And then, to the surprise of almost everyone at the ground, including the Sky Sports commentary team, Ashley Klein, the marvellous man that he is, pressed his whistle to his lips. It didn’t matter that no one really knew what had happened, all that mattered was that Ashley, wonderful Ashley, was pointing to the posts. 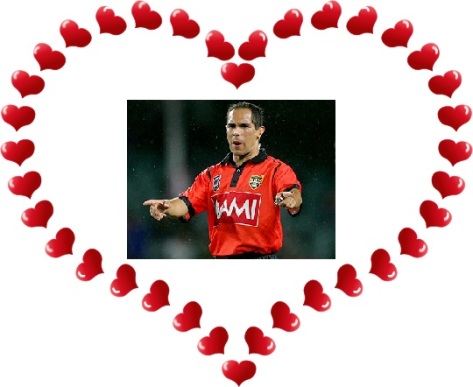 Shaun Johnson stepped up, took a few deep breaths, then sent the Steeden sailing towards the black dot.

The crowd erupted, rejoicing as one in a moment of confused elation. A moment of pure joy and great relief. First and foremost we celebrated a precious win, but also we celebrated because of what we had just witnessed. All that hard work and effort, all that resilience from both players and fans alike, had finally been rewarded. It wasn’t as heart-stopping as when Johnson danced his way through the Panthers in golden point in the 2016 rain, but, as we stood up from our seats to applaud and fist pump when dear old Ashley blew his whistle for the last time, it was a similar feeling of justification that filled our hearts. A just reward for commitment and desire. A sense that we deserved some good fortune, that we had earned the right to savour the sweet taste of victory from the cumulative efforts of recent weeks. The rain left us wet, but the performance soaked us in warm fuzzies. It was a match that felt like a must-win in the build-up, and a result that feels like a turning point in the aftermath.

Enjoy the week off, Warrior Nation, you earned it.

1) The Herald have dubbed it the Warriors’ best defensive effort in a decade, and it’s hard to argue. This was a star-studded Roosters side who posed questions all night and enjoyed long periods of sustained pressure on the Warriors’ line, but only managed two tries. One came from an intercept and the other from a one-on-one miss as the Warriors scrambled to set their defensive line after a Roosters’ breakaway. Roger Tuivasa-Sheck and Simon Mannering were standouts — something we are becoming accustomed to in 2017 – but every Warriors player can hold their head up high after that performance. This was a game the Roosters should have won, but the men from Mt Smart found a way to stay in the contest long enough for the ball to bounce their way.

2) But there’s still a lot of room for improvement. This is perhaps the most encouraging part about the win. The effort, particularly at the defensive end, has been improving week after week, but the attacking execution has a long way to go. For the third week in a row, the Warriors lost their shape as the second half wore on, at times lacking direction, go-forward and a creative spark. Defence like that lays a great platform, as well as building confidence and trust among the playing group — all incredibly important to team success — but if that attack clicks into gear, there’s no telling how good this side could be.

3) Time to hunt in packs. One area I’d be focusing on is adding a little more motion with ball in hand. It was nice to see the Warriors shift the ball wide a few times on the 3rd or 4th tackle, but still too often a Warriors player takes a hit-up and there’s no other player within 5 metres of them. There’s nothing wrong with keeping it simple, but having someone at least jog towards the line on either side of the ball-carrier gives the defenders something to think about and keeps them honest. You never know when someone will get an arm free or poke their nose through the line, and in a tight contest you don’t want to miss that opportunity when it presents itself.

4) Don’t tease me, Kieran. Is there a chance Kieran Foran could stay at the club for another year? This article, which quotes Foran as saying ‘I’m just chatting closely with [Warriors managing director] Jim [Doyle] and I’ve been really honest with him and upfront in saying if I can make it work I’ll stay for another year,’ is the most encouraging piece I’ve read on the issue all year. I still don’t hold out much hope, as there’s clearly much more to this decision than football, but what a huge result it would be if the Warriors could keep this spine together through to the end of 2018.

5) The outside back picture just got very complicated. Charnze Nicoll-Klokstad was excellent on debut, David Fusitua looked great at centre, and, while I haven’t always been the biggest fan of Ken Maumalo or Blake Ayshford, both have been doing their jobs fairly well in recent weeks. So where does that leave Manu Vatuvei, who returned to the NSW Cup on Sunday? Or Solomone Kata, who could well be fit to play again after the international break? Stephen Kearney has some tough decisions on his hands for the away trip to Penrith, and I’m really intrigued to see which way he goes.

6) That win was absolutely crucial. The Warriors still find themselves down in 11th on the ladder, but only two points outside the Top 8. It’s been a familiar pattern in recent years for the men from Mt Smart to find form during the Origin period, but often they’ve started their run a long way back. That win keeps them among the peloton, and in a position to join a breakaway if they can take advantage of their schedule during the middle rounds.

It would be remiss of me to write an entire report and not discuss the refereeing decision that ultimately decided the match. Firstly, even after I remove the Warriors eyepatch, it was 100% the correct call from Ashley Klein. Mitchell Pearce was offside at marker, never retreated, was called out of the play by Klein and then attempted tackles on Shaun Johnson and Simon Mannering. Even Roosters coach Trent Robinson admitted as much. Would every referee in the NRL have given that decision? I don’t think so — there’s so much inconsistency that it feels like a guessing game as a fan sometimes — but ultimately I’m just glad it went our way on this occasion.