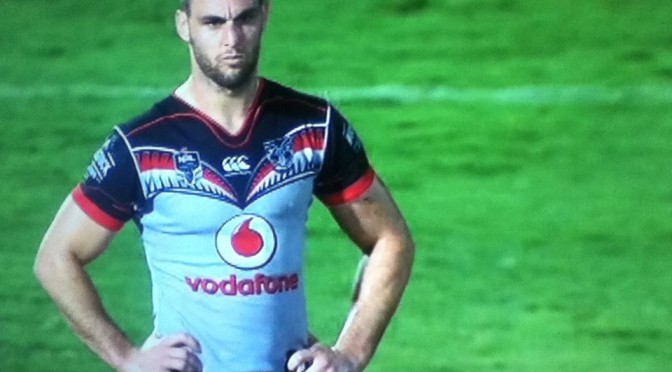 Another week, another loss. Familiar shadows of sorrow are falling on Warrior Nation. A season that started slowly, gathered momentum and eventually promised so much, is now hanging by the murmur of a prayer.

The trip to North Queensland was always going to be tough, but the men from Mt Smart made things extra hard for themselves. In the first half especially, dropped ball after dropped ball piled on the pressure and the Cowboys took full advantage. For the second consecutive week, the match was all but over by halftime. You simply cannot win NRL games with only 40 per cent of possession, particularly away from home against the defending champions.

At times it was hard to watch — every nerve in my body was numb as the Cowboys relentlessly pounded away at the Warriors’ line. The men from Mt Smart could only hold out for so long. An extended playoff drought has left scars strewn across Warrior Nation, scars that only victory can heal. I’m sure there are some fans out there who are beginning to wonder why they should even care anymore.

Slim hope remains, but time is running away. Three points outside the Top 8 with only two games remaining — our fate is no longer in our hands. All we can do is win, and hope results go our way. I was born on this ship, and I’ll die here before I jump overboard, but it’s getting harder and harder to fight that sinking feeling.

It’s not dark yet, Warrior Nation, but it’s getting there.

1) Start channelling your Panther pride. Forget about Sunday afternoon at home against the Tigers, the first obstacle to clear is on Saturday night when Penrith travel to the Gold Coast. The Panthers are absolutely flying, demolishing the Roosters, the Knights and the Tigers over the past three weeks, and fortunately they’ll be motivated not to lose ground in the jostle for playoff positioning. Let’s hope they can keep rolling and, in turn, keep the Warriors’ season alive.

2) Ata Hingano looked the part. We’ll never know how early Coach McFadden planned on throwing Hingano into the match, but after an injury to Ken Maumalo in the 17th minute, Ata got his chance. It was an impressive debut in a beaten side — he looked lively, ran the ball with confidence and equipped himself relatively well on defence given his lack of size. Another talented youngster who appears ready for the step up.

3) Why not Tui? It’s hard to know what role Hingano would have played had Maumalo not left the field, but it does make you wonder why Coach McFadden never explored the option of Leuluai to dummy half while Lolohea was in the match-day squad. If the coaching staff truly believe Lolohea’s best position is in the halves, and that Fusitu’a is the better fullback, surely this would have been the logical move? Instead, Lolohea, after a stint on the bench and a horror performance at the back, seems to have lost confidence and finds himself in reserve grade. What must he be thinking? Is he now behind Hingano in the pecking order? And what if Foran does come to the club in 2017, does Lolohea’s future still lie at Mt Smart?

If the Warriors season is over by 9:30pm on Saturday, I’d be very tempted to give Issac Luke and Shaun Johnson an early holiday. Let’s throw Lolohea and Hingano into the halves and give them a licence to thrill.

4) Simon Mannering never, never, never gives up. If there is one man at the Warriors who has earned the right to enjoy some success, it’s got to be Mannering. Year after year he puts his body on the line for his club, and far too often his efforts aren’t matched by those around him. At the weekend, he made a mammoth 69 tackles in 73 minutes. Without a single miss. He was everywhere.

5) In defence of Manu. Heavy defeat: Cue the criticisms about Manu’s defence. I think it’s clear by this point in his career that Manu Vatuvei isn’t the best defensive winger in the NRL, nor will he ever be. But I still find it very hard to blame a winger who is left as isolated as Manu often is. Allwood rushed up and in at every opportunity, and when he missed, he hung The Beast out to dry. It was a forgettable performance from Allwood, perhaps highlighting how much Solomone Kata has developed during 2016. Take a look at the images below — what is Manu to do when he’s outnumbered in so much space? (In both pictures Manu has an unmarked Kyle Feldt outside him.)

6) That was actually a reasonable defensive effort from the Warriors. It seems a hard case to argue when you concede 34 points, but with only 40 per cent possession, 13 fewer sets, a 57 per cent completion rate and 110 more tackles, the men from Mt Smart soaked up an enormous amount of pressure. The problem was that the pressure never stopped.