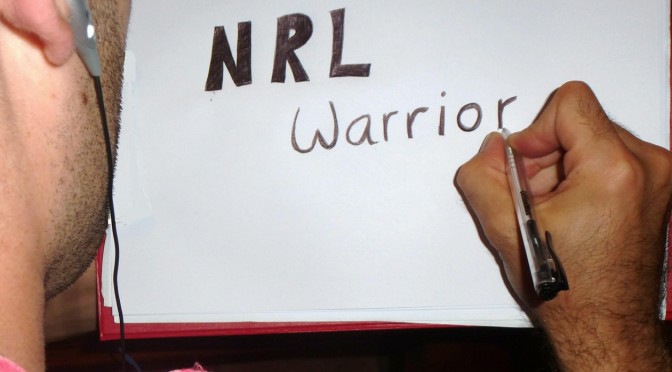 It’s been a rough week here in Warrior Nation. A disappointing loss to start the season and the critics and doubters are already out. Sack the coach, attitude and culture issues, recruits coming here to retire — it’s a familiar narrative. And it certainly doesn’t get any easier as the men from Mt Smart head to the cauldron that is Suncorp, to take on a Brisbane side touted by many as premiership favourites.

If the previous week is anything to go by, this game is a foregone conclusion. Just the thought of Anthony Milford and James Roberts running towards the Robson, Kata, Vatuvei edge is enough to make any Warriors fan want to curl up in a ball and rock gently backwards and forwards until sunlight streams in through the window and the sweet sound of birdsong fills the air.

But is there a way this Warriors outfit can cook up a solution? Can they find the right recipe to get this season back on track?

The ingredients are there:

All the preseason talk centred around the Warriors’ acquisitions, and the roster is as talented as any squad they’ve ever had. On paper, they can compete with anyone, but now it’s time to put that theory into practice.

Another week in the mixing pot:

It takes time to build combinations, and in that first half against the Tigers, the men from Mt Smart looked like a side that hadn’t figured out their roles yet. Let’s remember that the Cowboys lost their first three games in 2015 and ended the year with a premiership ring. Six more days to marinate doesn’t sound like much — the 80 minutes of football in Round 1 might actually prove more valuable than any time on the training ground — but hopefully it’s long enough to add the extra flavour needed to come away with the win.

The red-hot atmosphere at Suncorp might seem intimidating, but in fact it could be quite the opposite. The Kiwi ex-pats always turn out in numbers when the Warriors come to town and their support often brings out the best in the Penrose-based side. We only have to think back to 2013 when the Warriors racked up 56 points at the same venue.

Brisbane are one of the best defensive sides in the competition. They always seem to have numbers on the edges and never seem to panic. But the Warriors have a host of players who can pull off the extraordinary to break open a front line. Against a Brisbane side who are so good at the basics, there’s a case to be made that the men from Mt Smart would be best served to chance their arm once they enter opposition territory. I’m hoping we’ll see more of Tui Lolohea, next to Shaun Johnson and Roger Tuivasa-Sheck, on tackles four and five to really test the defensive appetite of the Broncos’ forward pack.

After a week of criticism, we’re about to discover how much hunger there is at Warriors HQ. Can they find an 80-minute performance, especially at the defensive end, or are we set to go hungry for yet another week? Dish up another dud and they’ll be 0–2 when they play host to the Storm. The knives will be out and the kitchen will feel awfully hot for Andrew McFadden. But fill a doggy bag with the two points from the home of the 2015 Grand Finalists and there’ll be nothing but positive reviews.

Even monkeys tapping at a typewriter eventually bash out a Shakespearean drama. So it’s got to happen for this team one day, right? The Warriors rollercoaster has turned into a freefall, and a fairly predictable one at that. For nine straight games it’s been plummeting — surely it’s due a change of direction? Surely?! Throw in an extra three and a half cups of concrete to the defence, a handful of extra spices on attack and a teaspoon of momentum and you just never know . . .

We go all the way back to 2010 for a famous Warriors win at Suncorp.