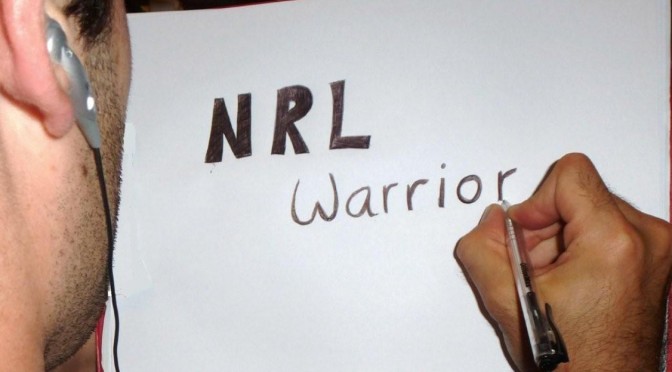 Saturday night was so terrible that it’s not even worth discussing the finer details of the game. Both attack and defence were awful — unacceptable. With the season on the line, the men from Mt Smart huffed and puffed for a while, but, when they couldn’t blow the Dragons’ door down, couldn’t even ruffle the hairs on their chinny chin chin, the Warriors simply lay down to die.

The performance was indefensible, inexcusable, especially for those fans who braved that Wellington weather right to the very end. The softness of that Mitch Rein try might be etched in my brain forever.

When something like this happens, the media explodes. The knives are out — for the players, for the coaching staff, for the Under 20s — for the entire club. For the game of rugby league. But for the fans, it’s not such a simple equation.

When you’ve loved something for 20 years, it’s not always easy to ask the tough questions. It’s even harder to walk away. Just ask the fan who listed all their jerseys on TradeMe — you feel angry, hurt and disappointed, but deep down the love is still there.

Sometimes it helps to vent, to scream and shout. Sometimes it’s easier to put the TV on mute, pull your shirt over your head, curl into a ball on the couch and lie there in silence. Everyone has their own way of coping. There are worse things in life than your team losing — I’m not trying to tell you otherwise — but it still hurts.

Saturday night brought back memories that were long buried. Round 10, 2013. Penrith 62. Warriors 6. Before that match, I remember speaking proudly of my team, these men from Mt Smart who may have been down (2 wins and 7 losses from the first 9 games of the season), but I was sure they weren’t out. I spoke of effort, of almosts and nearlys and hard work that would eventually be rewarded. The 80 minutes that followed was a heartbreak of epic proportions.

That’s the problem with being a fan: you can’t control your destiny. No matter how hard you work, how much time, commitment, passion, money, love you pour into that vision, you’re relying on other people to make your dreams come true. It’s a brave thing to do, to put your emotions in the hands of somebody else, to be vulnerable.

There’s no shame in losing. When you’re beaten by a better side, when the effort is there, when you see someone fight for you, see them give it absolutely everything they’ve got and still come up short. Sometimes that actually strengthens the bond, helps to build the trust. But, on nights like the Cake Tin debacle, it feels like only one half of the relationship is trying. It feels like all your efforts, all your energy, your love, your support, means nothing. And that’s what hurts the most: when it feels like they don’t share your dreams, when you start to wonder if maybe they don’t care about this relationship as much as you do.

The quick play the ball:

I’m as frustrated as anyone with how this season has gone from promising to disastrous in four weeks — and it might get worse before it gets better. But do we really want to fire the coach? Really?

I haven’t always agreed with everything Andrew McFadden has done, but what is the value in starting all over again? Have we not tried that approach already? Over and over again?

You can hear in his voice that McFadden wants this to work. He wants to be at the club for 10 years, for a lifetime. Maybe it won’t work out. Maybe it will. But let’s at least give him a decent shot at it. The grass is not always greener on the other side.

One thought on “Hurt Feelings”