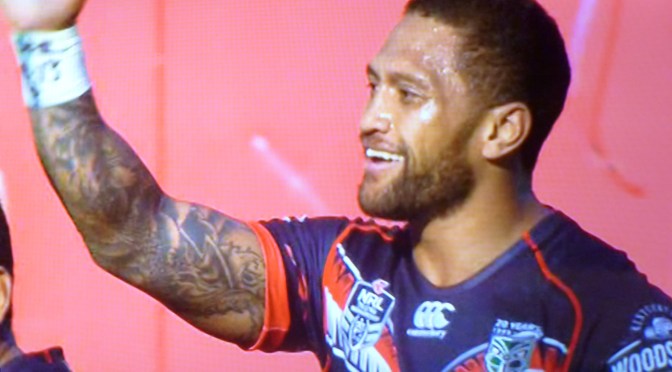 How bad can it get? That’s the question on everyone’s lips. The past two weeks have been bad.

After the dizzy heights of the Top 4 only 2 weeks ago, the Warriors’ season is now in freefall. Remember that sinking sensation you often get around this time of year Warrior Nation? Can you feel it creeping back? Throw in the injury to Shaun Johnson and many punters have already ripped up their tickets on the men from Mt Smart.

But have we hit rock bottom?

The good thing about sport is that each new week provides a fresh start, another chance to turn things around. On Saturday night, the Warriors have an opportunity to cast off the doom and gloom, bounce back and, more importantly, prove to themselves that they belong in the playoff picture.

Despite still sitting inside the Top 8, it’s clear from team selection that there’s a sense of desperation around Mt Smart. There’s even whispers Ryan Hoffman may be rushed back into the side.

Bringing the ball out of their own end has been a major issue during the past two losses, so Coach Cappy has put a call out to all the big boppers.

Ben Matulino moves to the second-row and back comes Vatuvei, Hurrell, Maumalo, Lisone and Gubb in an attempt to bring more size, strength and energy to the table. The inclusion of Jonathan Wright on an extended bench casts a few doubts in the mind about Vatuvei’s fitness, but Big Manu has had a strong media presence this week, which generally suggests he’ll take the field.

The return of The Beast is key — Manu’s first-tackle carries instantly make the Warriors a better side — and, with the other additions, you’re now looking at sets of six where every tackle is tough work for the opposition. With Manu, Maumalo, Hurrell and Kata to start things off, Lillyman, Vete and Lisone up the middle, and Matulino and Mannering out wider looking for offloads, the metres gained column should receive a huge shot in the arm. Some disruption is likely, simply down to the sheer number of changes, but the power in this line-up means, as long as the Warriors can hold on to the ball, the Sharks can at least expect a few bruises come Sunday morning.

The extra size is also perhaps an indication about the style of game the Warriors expect from the Sharks. Cronulla are a hard-nosed outfit, with hammerheads like Gallen and Ennis who thrive on grinding the opposition into submission. They’re relentless, bashing and nipping at you all night and, when they smell blood in the water, they strike. Andrew Fifita is a loss for Cronulla but, even without him, their game is built around dominating the middle of the park and putting themselves in a position for the individual brilliance of the likes of Jack Bird, Ben Barba and Valentine Holmes to create points. The Warriors will need a big improvement from recent weeks to match up physically with this Sharks side and limit the impact of those X-factor players.

An interesting side note is the return of Anthony Tupou, which happens to coincide with the return of Konrad Hurrell. After the sickening blow that broke Tupou’s jaw in Round 9, surely he’ll be hearing a few voices in the back of his mind as he braces himself to tackle Konrad at the weekend. As ruthless as it sounds, the Warriors should aim to get Hurrell 1-on-1 with Tupou as much as possible, as they’ll need to exploit every potential Cronulla weak point in order to get the two points.

What to watch for:

There’s been a lot of discussion about the defensive side of the game, and there’s every chance this match turns into a real slugfest. But, as bad as the defence has been over the past two weeks, this Warriors team hasn’t exactly looked like world-beaters on attack either, even with Shaun Johnson’s magic feet. In a game where every point could be at a premium, the Warriors need to offer a lot more than a few hit-ups and shovelling it across field in the hope that Lolohea or Townsend finds a lazy defender. There’s been so many changes this week that cohesion could be an issue, but the men from Mt Smart need to find their offensive mojo quickly if they want to get their season back on track.

It’s absolutely must-win now. While a loss in this game wouldn’t mathematically rule out the Warriors, it would be a crushing blow to their confidence, and it’s hard to see them recovering from three straight losses. Personally, I think proving to themselves they can win without Shaun Johnson is the most important factor. Once they get over that hurdle, there’s certainly still enough talent in this side to at least make the Top 8.

They’ll need to show a lot more desperation than last week, as the Sharks won’t back down until that final whistle blows. It’s a game that makes me nervous just thinking about it because I have absolutely no confidence about what to expect apart from a game filled with cold sweats from beginning to end. I’m hoping we’ll see a performance filled with energy and desire, and if that’s the case, I think the men from Mt Smart sneak home in a tight one. Let’s go Warriors by 4. But anything less than 100 per cent in the effort department, though, and you can kiss goodbye to 2015. 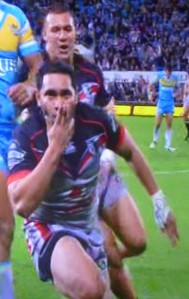