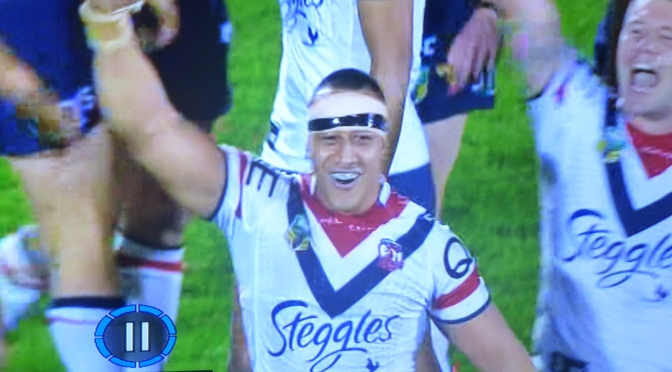 It was cold. Real cold. And we were promised fried chicken.

The Warriors were controlling possession, forcing line-dropouts and playing error-free football. It wasn’t flashy — it took 28 minutes before they broke the deadlock — but it was dreamlike. Like waves gently lapping at the beach. There was a calmness to it, a serenity. There was patience like we’d never seen before in 2015.

Manu was setting records that might never be broken (we often talk of Manu’s greatness but another shout out to The Beast — a truly remarkable effort), the woman behind me had stopped shouting ‘break his arm’ every time one of the Chooks touched the ball and even the video refs were serving up exactly what we were all craving.

Solomone Kata felt like the king of the world.

It didn’t matter that the Roosters scored just before halftime, because the Warriors hit straight back after oranges to make it 20–6. Everything was going to be okay, wasn’t it?

Maybe I should have seen it coming when the zombies invaded the field at halftime. When the air got cooler and an eerie silence came across the crowd.

But sometimes when your belly is full you don’t see the signs, sometimes your senses are clouded by a warm, satisfied feeling and the obvious isn’t so obvious any more.

And then you spend the next 30 minutes shifting uncomfortably in your seat because you know what’s going to happen even before it’s happened and you tell the people around you that it’s going to happen because sometimes if you use reverse psychology and say it out loud then it won’t happen but then Nathan Friend gets injured and you know everything in your life so far has led up to this moment but aren’t playing, you’re just watching so you can’t change it and you have to sit back and watch through the gaps between your fingers because you can’t just get up and leave because that’s not how it works and you never know if this time might be the time when it’s the best finish ever and then if you left you’d have missed the Greatest. Game. Ever. So you sit quietly and prepare yourself mentally for what is about to happen.

And, to the neutral observer, oh, what a climax it was.

There was an evil Badger who blew his whistle and then scurried underground as the crowd booed.

Sebastine Ikahihifo tried to take revenge by attacking the Badger’s reproductive organs, but the Badger is very good at defending itself. It is fearless. Even though the Badger resembles a weasel — it will kill you.

The Warriors tried to protect themselves from the impending doom by building a wall, which had the referee ducking for cover.

But even that wasn’t enough.

Just when it seemed the Warriors might escape with their lives, Jonathan Wright broke the first rule of horror movies — Never. Ever. Relax.

*The actual footage is too painful to relive

The Chooks went in for the kill.

And ripped out our hearts.

*This website does not condone the commentators finding humour in the video above. There is nothing funny about such a tragic scene, and the NRL Warrior sympathises greatly with both fans.

1) Keep your Friends close. Andrew Voss couldn’t speak highly enough of Nathan Friend during the commentary, and I’m fairly confident that if Friend isn’t forced from the field, the Warriors hang on and win that match. When Sam Tomkins was unable to take his place in the side, Coach McFadden took a calculated risk that Nathan Friend could play the full 80 minutes — a move that ultimately backfired. When Friend went off, there was a major reshuffle, with Chad Townsend moving to dummy half, Lolohea to standoff and Jonathan Wright to fullback. While the moves didn’t have a noticeable effect on attack, having Chad Townsend, arguably the Warriors’ worst defender, in one of the most crucial defensive positions, made it very easy for the Roosters to stroll down field and camp themselves at the Warriors’ end of the park. You can’t plan for injuries, but I think McFadden needs to take some of the blame here. I can’t think of a single reason why Jonathan Wright would come onto the field as an interchange other than as an injury replacement, so why is he there? The coaching staff would have known on gameday (if not before) that Tomkins was unavailable, and so there was plenty of opportunity to promote Siliva Havili, Dominique Peyroux or anyone else with more versatility into the top side.

2) Is Sio Siua Taukeiaho the one that got away? He’s being touted as SST, the new SBW, and his powerful running and strong tackling has made everyone stand up and take notice. I know it’s impossible for a club with a junior programme like the Warriors to hold on to all their young players, but the way Taukeiaho is performing at the moment it’s hard to imagine this monster won’t come back to bite them again and again as the years go by.

3) A well-constructed move. As much as I think it should be against the rules, you’ve got to give the men from Mt Smart some credit for coming up with the plan to build a wall and then executing it to perfection. Do you think ‘The Wall’ will quickly be banned? You’ve also got to wonder if only the Warriors could build a wall that solid in front of their own tryline, maybe they wouldn’t need to be kicking drop goals at all.

4) Sebastine Ikahihifo played his best game in a Warriors jumper. It was his offload that created the break leading to Tui Lolohea’s try, and in his 39 minutes on the field he made 21 tackles and had 16 runs for 149 metres. Huge numbers for someone who only played half a game. He’s had very little impact so far this season, but he’s definitely put his hand up after that performance.

5) The curious case of Konrad Hurrell. There’s been a lot of criticism sent Konrad’s way this year, but Saturday night he looked like a new man. It wasn’t just that he reversed the aging process by shaving off his beard, but he got through an entire game error-free and made a couple of excellent defensive reads. Can we now expect to see this Hurrell every week?

6) Where do you sit on the Sam Tomkins issue? I sense a growing frustration around Tomkins, and calls for him to go home are growing louder the longer he remains out of the side. While part of me thinks why not just let Tui Lolohea, Ken Maumalo and the other young Warriors continue to grow at this top level, the other part of me just wants to win. Tomkins will go down as a bust — his huge price tag, early exit and injuries have made that inevitable — but there’s no doubt in my mind the Warriors are a better side with him than without him.

Blaming the referee is usually the easy way out, but that was a gut-wrenching loss and I feel like I need to have a vent. How Gavin Badger and his beard thought the Roosters warranted six more tackles when the ball hit Chad Townsend, I’ll never know. It was such a huge call in the context of the game, and when James Maloney strolled through to score a couple of tackles later, it felt like it ultimately cost the Warriors the game. Sure, there are plenty of other moments that you could argue decided the game — like Jonathan Wright’s ‘off with the head, on with the pumpkin’ moment — but it’s hard not to feel wronged when a big decision like that goes against you at such a crucial time. You be the judge.

3 thoughts on “Keep Your Friends Close”