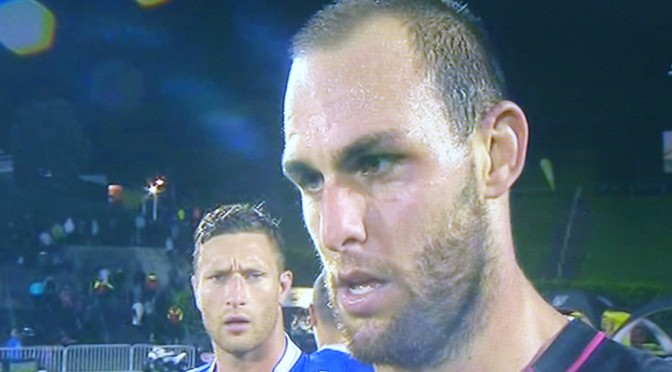 Can we just have one stress-free day? Just one?

As much as I’m loving the fact that the Warriors are winning the close ones, and that they went through May unbeaten, my blood pressure could really do with a comfortable victory. Just one sweet day.

To be fair, it never felt like the men from Mt Smart could lose the game until the last five minutes. But, in saying that, you could quite easily argue that a Newcastle side missing the likes of Kurt Gidley, Jeremy Smith, Kade Snowden and then Tyrone Roberts, shouldn’t have got close.

It was clear that the Warriors were the more talented side on Sunday. They scored a couple of great tries, and always seemed to get across the line when they needed to, spending most of the game more than a converted try ahead. But they lacked the discipline required to put Newcastle away once and for all. If I’ve said it once, I’ve said it a million times — if you let any team in the NRL hang around long enough, they can beat you.

There’s a part of me that thinks this string of wins is like one of Lionel Richie’s glittery jackets — at first glance they look shiny and exciting, but when you run the material through your fingers the beads fall off and it doesn’t feel that good to touch. The Warriors are surviving their marshmallow tests and securing the two points, but the dishes they’ve served up haven’t been very appetising.

‘What’s with all the negativity?’ you may think to yourself. And you’ve probably got a point. The Warriors now sit comfortably inside the Top 8, a win ahead of Penrith, Canberra and the Bulldogs. String a couple more wins in a row and we’ll be starting to talk about Top 4. But it would be foolish to think the Warriors are playing at a high level. By their own admission, they’ve got plenty to work on. At the moment, the less said about the actual games, the better. Take the points, move on, and prepare for tougher tests that lie just around the corner.

1) Shaun Johnson’s kicking game was fantastic. Maybe it was emphasised by the fact Newcastle lost their main kicker, Tyrone Roberts, only minutes into the game, but Johnson was definitely wearing his golden boots on Sunday (just not the goal-kicking ones!). Johnson shouldered a bigger load of the kicking duties, and had a huge hand in keeping the Novocastrians pinned at their own end for the majority of the game. Long may this continue.

2) How do the Warriors fix their defensive lapses? For the most part on Sunday, the Warriors’ defence was very strong. Newcastle rarely made it past halfway without a piggyback penalty or a Warriors’ error, but somehow they were still able to score four tries. It’s hard to pinpoint exactly what is going wrong, and Coach Cappy must be scratching his head every time he reviews the tape. A missed tackle here, a poor read there, and all the other good work is being undone. Maybe it’s still an attitude thing, or a product of young players learning the game at the top level, but they can’t continue to make the same mistakes against the better sides or they’ll pay the ultimate price.

3) The Beast is the Warriors’ most important player with ball in hand. I’m not sure there is anyone in the NRL who makes more metres from first tackle carries than Manu Vatuvei. I’d love to see the official stats on that one. It’s not often highlighted as a crucial part of the game, but the way Manu helps the Warriors get out of their own end seriously is game-changing. It’s the difference between an attacking or a defensive kick at the end of their sets, and the Beast’s metres and the quick play-the-ball that follows eases the pressure on the rest of the set. Sure he still makes the odd error, but the work he does is second-to-none.

4) Ken Maumolo is knocking on the door. He’s not going to take Manu’s spot, and Jonathan Wright is making a home for himself on the opposite wing. But anyone who saw Maumolo play in the NSW Cup game on Sunday would have seen he’s certainly ready for an extended run at the top level. He was like a Beast clone, eating up the metres out of his own end and busting through defenders like Josh Hodgson v door. With Fusitu’a, Fisiiahi and Hurrell all coming back in the coming weeks, opportunities may be even more limited, but keep your eye on this kid.

5) I’ve heard some criticism of Sam Tomkins’ performance, but it is a totally different story watching him live. Much of the work Tomkins does at the defensive end is off the ball. On Sunday, Tomkins was directing traffic and barking out orders more than any other player I’ve seen this season. He also looked completely untroubled under the high ball. If that’s his worst performance of the year, we’ve got a lot to look forward to.

6) Carlos Tuimavave really stepped up. The absence of Kurt Gidley and the loss of Tyrone Roberts only minutes into the game could have crushed Newcastle’s chances. Perhaps they should have. They certainly hurt their kicking game, and at times the Novocastrians struggled to get out of their half without a helping hand. But the man who Matthew Elliott dubbed the next Laurie Daley equipped himself well, posing a threat to the Warriors’ line as he played his part in keeping the game close. It’s always nice to see a former Warrior play well and hopefully he’ll be able to take advantage of Newcastle’s injury troubles to get an extended run in the side.

The Warriors picked up their third win on the bounce, all of which have been by a margin of 4 points. The men from Mt Smart are winning the close ones, and they’re beating the teams they should be beating. All really positive signs. They now sit in 7th on the ladder, and it’s an accurate indication of where they are as a footy side. They are clearly one of the top 8 sides in the competition. But they are also their own worst enemy. And until that changes, the fringes of the 8 is where they’ll remain.

One thought on “Fair To Middling”