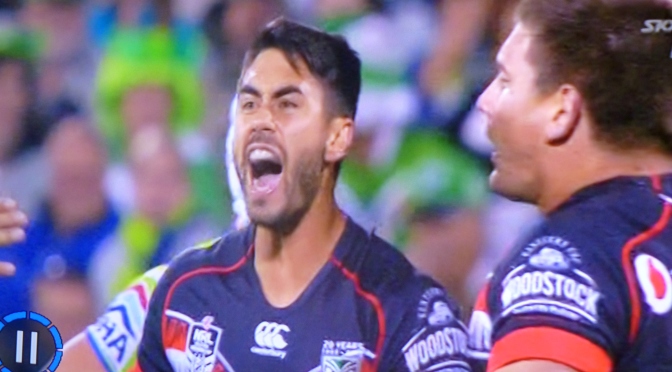 I have to admit, I didn’t expect Canberra to put up that much of a fight. I know it was away from home. I know we gave up a second-half lead in Round One against the Knights. Maybe recent memories of thumping the Raiders by 50 got the better of me, but I expected to sit back, relax and enjoy the try-fest.

But after Jack Wighton and Blake Austin had both busted through the line and it was still 0–0 at the 25-minute mark, I was starting to wonder if I’d seriously over-rated this Warriors outfit. In fact, I think I’d actually under-rated Canberra. This young Raiders side were dangerous with ball in hand, Austin especially, and the men from Mt Smart still weren’t quite clicking.

But the Warriors sure know how to put on a scrum move and suddenly it was 6–0 after the impressive Manu Vatuvei finished in the corner.

A silly penalty given away on the fifth tackle by Solomone Kata led to an almost unstoppable try by Sisa Waqa, and it was all square at the break after plenty of effort from both sides.

After the Powerade and oranges, Paul Vaughan did this:

And the Warriors capitalised — first through Solomone Kata’s maiden NRL try, and then from the perfect set of six. After receiving the ball on their own line from the kick-off, the men from Mt Smart marched all the way to the other end and scored on a deft fifth-tackle kick to go bang-bang and extend the lead to 18–6 after 45 minutes.

From then on, Canberra gave it everything they had, lifting the intensity on defence, but, pleasingly, the Warriors defensive line was impossible to breach. Every time the Raiders looked like they might score, someone was there to save the day.

The first two points of the season secured. And Shaun Johnson was pumped.

So, all in all, a solid win away from home against a side who might upset a few other teams over the course of the season. Great to see the two points built around defence for a change — to only concede one try (from a high kick) is no easy task in any NRL game.

There are definitely plenty of work-ons, which is to be expected at this point in the season, but at least it’s hard to argue with the effort shown on Sunday night. Ben Matulino was absolutely gassed after the game, hardly able to speak in the after-match interview, which is exactly how I hope he feels at the end of every game. It looks like Cappy McFadden is trying to keep his best players on the field for as long as possible, a tactic that will hopefully pay off when times get even tougher come the business end of the season.

The halves are a slight concern and it’s hard to pinpoint what is actually wrong there. It’s worth pointing out that even though Shaun Johnson was particularly quiet, he did nail all three conversions, came up with a crucial tackle late in the game that forced an error and produced a superb kick to finish a set and effectively seal the game with only a few minutes left. I’d like to see both Johnson and Chad Townsend take charge more and more as the season progresses — they were certainly responsible for more than their share of the 18 errors that led to a less-than-impressive 63% completion rate.

THE SET OF SIX:

Sam Lisone is big, powerful, evasive and has serious play-making skills to boot. He ran for 130 metres off the bench, served up a nice brioche for Jacob Lillyman that should have sealed the 2 points with 10 minutes to go and threw himself around on defence. By the end of the season, the whole competition is going to be talking about this kid — he’s a bona fide star who I wouldn’t be surprised to see in a Kiwis jumper come the Anzac test.

One thought on “It’s Not That Easy Being Green”